Year of establishment: 2012 г. on the basis of Center of Genomic Technologies at the Institute of Genetics and Plant Experimental Biology, Academy of Sciences of Uzbekistan 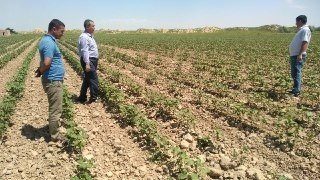 A large number of core-set microsatellite DNA markers have been developed and applied for cotton genome research. For the first time several DNA markers associated with cotton natural leaf defoliation were identified and localized on Ch18. Additionally genetic loci associated with fiber yield were identified and localized using chromosome substituted lines on chromosomes 12, 18, 23 and 26. Some DNA markers were also associated with fiber initiation and development and finally recommended for utilization in marker assisted breeding. DNA markers were successfully used for genetic mapping of photoperiod genes in cotton.
A large number of unique cotton small RNAs involved in initiation of cotton fiber development  were cloned and annotated; small RNAs playing an important role in Fusarium wilt and root-knot nematode pathogenesis were also characterized.
For the first time in the world cotton genome research, the length of recombination blocks (i.e.  the extent of linkage disequilibrium level) of cotton genome were estimated and DNA markers associated with fiber yield and quality were identified using association mapping. Molecular and phylogenetic diversity of cotton germplasm collection were studied.
A complex study of genetic structure of Uzbek population was done by using analysis of Alu insertions and mitochondrial HVR region polymorphisms.

For the first time cotton phytochrome gene family were cloned and characterized, a molecular evolution of phytochrome gene family was studied. Phytochrome genes play an important role in photomorphogenesis, flowering and fiber elongation. It was shown that tetraploid cottons have four  PHYA, two PHYB  and two PHYE genes. We have developed phytochrome specific gene knock-out technology.
A number of DNA markers associated with cotton Fusarium wilt resistance were identified.
A family of cotton MIC-3 genes were cloned and sequenced. MIC-3 gene family plays  an important role in plant defense along with PR-proteins. Molecular evolution of different cotton genomes was studied and for the first time pathogen-dependent gene duplication pattern in cotton was identified that completely fit with «bait and switch» and «guard and decoy» evolution models of resistant genes in plants.

From several diploid and tetraploid cotton genomes an ortholog of Arabidopsis eskimo-1 gene was cloned and sequenced, which is cold resistance gene and plays important role in drought resistance in cotton.
There is a research team of cotton genomics in CGB, which is successfully developing and keep on growing (academician Abdukarimov A. and Prof. Abdurakhmonov I.Y).
The scientists of the  Center have received numerous international awards such as The World Academy of Sciences (TWAS, http://twas.ictp.it/) TWAS prize 2010, and ICAC researcher of the Year 2013 for fundamental contribution in the fields of cotton genomics, cotton genetic diversity, understanding of molecular basis of utilization of cotton diversity. In 2014, Prof. Ibrokhim Abdurakhmonov has been elected as TWAS Fellow.
In 2012 and 2014, two  monography books entitled «Plant breeding» (ISBN 978-953-307-932-5; http://www.intechopen.com/books/plant-breeding)  and “World Cotton Germplasm Resources” (ISBN 978-953-51-1622-6; http://www.intechopen.com/books/world-cotton-germplasm-resources) was published, which became a handbook for students and young researchers working on crop plants breeding.
In 2013, a special issue of «Cotton Research in Uzbekistan»  in the Asian and Australasian Journal of Plant Sciences and Biotechnology (http://www.globalsciencebooks.info/Journals/AAJPSB.html) was published, where Uzbek scientists reported about current research and findings in the field of cotton science.
In 2014 a monography book on « World Cotton Germplasm Resources» (ISBN 978-953-51-1622-6, http://www.intechopen.com/books/world-cotton-germplasm-resources) was published.

On the basis of fundamental studies of gene mapping, for the first time, a panel of core-set DNA markers effective for identification of loci associated with fiber quality and useful for marker assisted selection (MAS) programs was created. Using DNA-marker based technology, the fourth generations of  MAS cotton lines with improved fiber quality were developed. These lines are being evaluated in field trials with the aim of commercialization of the first generation MAS cotton cultivars in Uzbekistan. 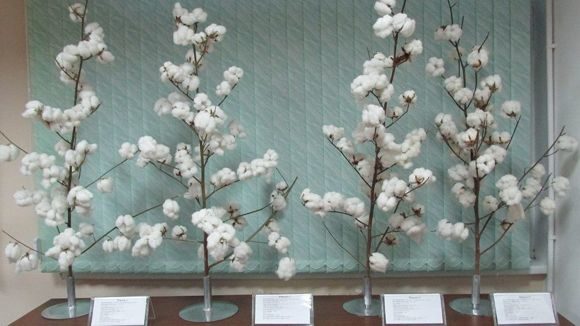 A molecular-genetic passports (DNA barcodes) of cotton varieties and lines from Uzbek cotton germplasm collection were created which will be a basis for protection of intellectual property rights of cotton germplasm resources and genetically modified varieties developed in Uzbekistan.

For the first time, a gene knock-out technology in cotton was developed with successful silencing of genes responsible for flowering and fiber quality traits.  Using this technology, a number of varieties (Porloq-1, 2, 3 and 4) with improved fiber quality, early maturity and high fiber yield have been developed.
In 2012 with the purpose of protecting the gene knock-out technology a patent applications for the concept of the technology have been filed in Uzbekistan (IAP20120069), USA (USPTO:13/445696) and internationally (PCT/US13/27801). For seed propagation of genetically modified cotton varieties, a special seed-breeding and production facility were built under support and supervision of Cabinet of Ministers of Uzbekistan.
With the aim of extension and further development of genomics science in Uzbekistan in CGB International Training Center was established, where students, young scientists and specialists are  being routinely trained. There are a number of lecture series on novel genomic technologies have been prepared and published, which are being successfully used for educational process.
In CGB, GMO Testing Unit was established that has been accredited by National Agency of Standardization of Uzbekistan with the certificate № UZ.AMT.07.MAI. 736.

During the period from 2002-2013, six mutually beneficial bilateral cooperative projects of our Center were funded through the U.S. Department of Agriculture (USDA) Agricultural Research Service (ARS) and Texas A&M University Systems (TAMUS), with support from the U.S. Department of State. These USDA-ARS/TAMUS programs were the most successful of all U.S. Government supported programs in Uzbekistan because their activities were based on globally-important and mutually beneficial research interests such as cotton research. These successful collaborations evidenced by the training of 10 young Uzbek scientists in TAMU/USDA laboratories; genetic mapping, cloning and characterization of novel agronomically important cotton genes; exchange of large number of cotton germplasm accessions including unique cotton cytogenetic stocks and  chromosome substitution lines developed by TAMUS/USDA; and an internationally recognized collaboration in cotton genomics research, resulting in more than 60 scientific papers and book chapters in international peer-reviewed and local journals; presentations of 16 invited talks/seminars in international conferences/seminar series, 7 patents related to cotton biotechnology including a joint Uzbekistan/USDA/TAMU patent application [Uzbekistan (IAP 20120069) and USA (USPTO:13/445696), and internationally (PCT/US13/27801]; over 100 international and local conference abstracts; and the coordination of two joint US-Uzbekistan technical workshops on genomics that has contributed to the establishment of a modern research laboratory that is unique to Central Asia. Partner organizations are listed below:

Future prospectives and research in the CGB.

Identification and sequencing of genes responsible for pest and disease resistance, drought and salt resistance, early maturity, fiber yield and quality will be continued in the Center. Genomic approaches will also be applied to other crops. For this purpose whole exome and transcriptome sequencing of important crops will be done using high throughput next generation sequencing platform “Roche 454 FLX that is being installed in the Center.
The results will be used for further development of novel genome technologies, such as gene pyramiding (GP), genomic selection (GS) and virtual breeding (VB), which are necessary for breeding and biotechnology programs of important crops and animal breeds.
New genetic engineering technologies such as “Zinc-finger” and “TALEN” for site-specific genome edition will be applied for development of genetically enriched crops without introducing any alien genes or transgenic constructs. We also will extend our studies in genomics and bioinformatics, molecular biotechnology, transcriptomics and proteomics for microorganisms, plants, animals and human. Extensive field tests and further commercialization of “gene knock-out” varieties (Porloq-1, 2, 3 and 4) will be done.
The cotton “gene knock-out” technology protected by UZ-US as well as international (PCT) patent applications is under licensing procedure. The unique infrastructure with modern facilities and equipment will be kept to be developed and used for wide genomic and bioinformatics studies of microorganisms, plants, animals and humans.  To ensure competitiveness of developed approaches a specific attention will be given to increase mutually beneficial international collaborations as well as continuous trainings of young scientists’ and students in Uzbekistan and abroad centers.